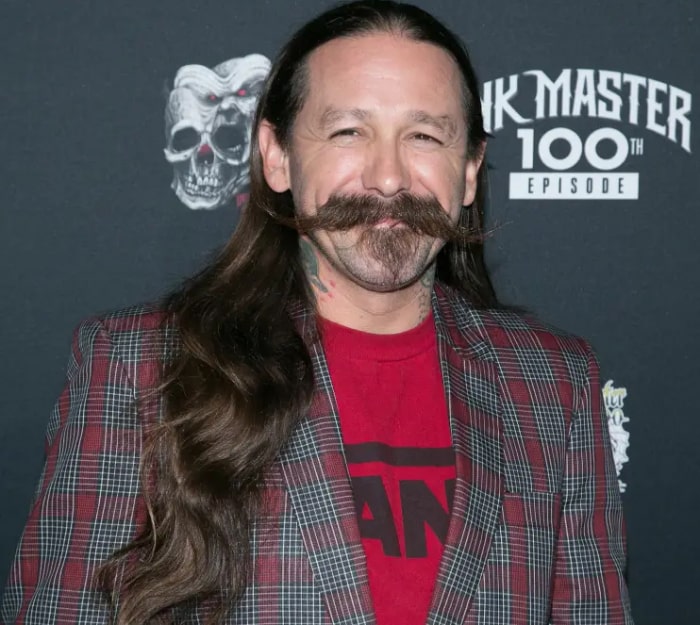 Oliver peck is a famous American Tattoo artist, author, musician, reality television judge, and restaurateur. He was popularly known for his tattoo artistry and has judged the 13 seasons of the reality show Ink Master.

He was born on 29th July 1971 in Dallas, Texas, United States. The mother name of the artist is Diane Lucas. However, no data is available regarding his  father. He married his fellow tattoo artist Kat Von D in 2003. But due to some reasons, they got separated in 2007. The couple has a daughter together. Currently, he is married to Rafael Reyes. He likes to collect Harley Davidson motorcycles.

When he was just 17 years old, he started giving tattoos to himself and his friends. And just the age of 19, he becomes a professional tattoo artist. In 2012, he judge the first season of the reality show “Ink Master” and continued to judge till season 13. But then his photos of peck in blackface circulated the entire Internet making him leave the show. He says he left the show so that the offensive pictures do not distract the great personalities and talent working in the show.

He credits to creating the ritual of tattooing $13 on Friday the 13th. He also made a record to give a tattoo to 415 different people in 24 hours. The same record is registered in the Guinness Book of World Records. For his amazing artistry work, he won the “Best Tattoo Artist” in the best of Dallas contest. He also has two commercial Tattoo studios named Elm Street Tattoo and Hollywood’s True Tattoo.

Talking about his restaurateur career. He opened Tiki Loco which is a hybrid of a coffee shop and a vegan restaurant. It is a combination of Mexican and Hawaiian and serves fresh juices, coffees, shaved ice, and vegan tacos. The restaurant has great food and was very hit with its own spice blends. One of the biggest things about the restaurant is that the leftover food present there is distributed to the hospitals present in that area.

He was not a conventional student. He enrolled at the South West High School but does not attend classes. He discovered his love for drawing and art at an early age. He was also a great skater during his school days. When he became a teenager, he got involved in drugs and got addicted to the drugs. Then his passion for tattooing ignited inside him.