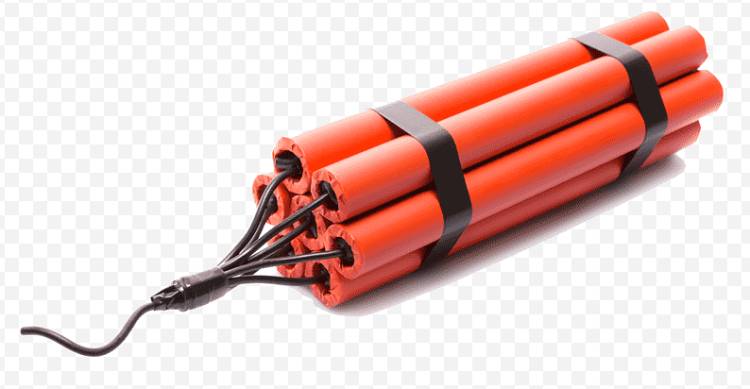 Alfred Nobel invented Dynamite. In 1863 he used a patent detonator or blasting cap for erupting nitro-glycerine. The detonator or the device used strong shock to explode the explosion. Previously they used to heat the combustion to ignite the explosive. In 1866 Alfred Nobel from Stockholm brought the latest explosive or dynamite.

Alfred Nobel has made the Dynamite consist of nitro-glycerine with absorbents and stabilizers. Its original combination was divided into three parts. Explosive oil, the second part for absorbent was diatomaceous earth and a small add mixture of sodium carbonate. After Alfred Nobel, Nowadays the diatomaceous earth is not used as an absorbent. It is replaced with wood pulp, sawdust, flour, or starch. Other Stabilizers in place of sodium carbonate are zinc-oxide and calcium carbonate. A stock of dynamite produced contains roughly 1 megajoule of energy. Dynamite is sensitive to shock. If you are carrying or storing it, then make sure it does not come into any shaking composition. The shock resistance test is done by a drop hammer before the final stage of selling.

How dynamite has changed the life of people

Dynamite has changed the history of industrialization in many ways. People used to carry heavy materials for them to the worksite. This involves many people together and time. If there is an iron beam you want to carry to other places, then it is important to invite as many workers as possible together. They are not available all time. They have to leave their ongoing work to come to help their co-workers. If there is any cutting, carrying, or taking out coal from the mine, there also involves many people. The lumpsum chunk of coal cannot be crushed by one or two workers. This has been changed by the use of dynamite. We cut or break things into pieces and the work becomes easy and less time consuming to carry.

Dynamite has a good side to usage. At Present day dynamite is used in the mining, construction, demolition industry, and quarrying. It is a kind of explosive. It was used for helping the people in carrying heavy things into pieces. People used to blast the material with the help of dynamite. In Movies, we have seen dynamites. In Coal mining, the dynamite blast is common practice. Tough the explosion has only meant to help the worker in their strenuous work. It is occasionally used as an initiator or booster for explosive charges.

We must appreciate the invention as it helps us out to do work easily. But if the misuse has been generated, it is shameful and sad.